Seek and ye shall find...

September and also the beginning of October have been very busy. Not only all the teaching and traveling that has been going on, but also suddenly quite a bit of computer work for SAQA in my function as co-rep for the region Europe/Middle East. First an e-mail discussion whether the next exhibition "Wide Horizons" (coming up soon) should be accompanied by a catalogue, and then a lot of preparations of blog posts for SAQA as there is going to be a giveaway on the regional blog. It's going to happen any time now - why don't you check it out and take your chance on being the winner of a box of the brandnew SAQA Signature Thread Collection, which was kindly donated for this purpose by Alex Veronelli of Aurifil. 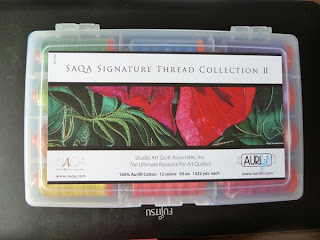 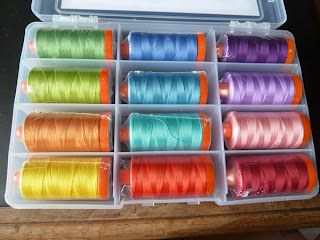 In the midst of all of this it sometimes felt as if I was losing my head. I spent much more time on the computer than I really care for, much less time at the sewing machine than I would have liked - and I have several dealines breathing down my neck. Which I might meet. Or not, but better should...
The situation went wild this past weekend/Monday. In order to start living up to my own good intentions of clearing out some of my stuff in the studio I had started a bit and tried to get stuff off the floor, including putting boxes back into the shelves. Yet after that I could not find the box which contained all the teaching materials for my weekly Log Cabin class at Landshut Community College. Spent several hours looking for that. It did turn up in the shelf, after all. But I swear it wasn't there when I first looked...
Next day my husband disappeared - he had said he was going to walk our son to school. Which is a ten minute walk. When he hadn't returned after one hour I was beginning to get worried - was this a case of "Honey, I am only going out to get some cigarettes..."-disappearance, or would I have to expect some policeman at the door soon? No kidding, I was really getting nervous, checking out the house whether he had returned unnoticed, but he hadn't. After two and a half hours he returned, he had stopped by at the doctors to arrange for an appointment and they had kept him there right away. And in the afternoon I was searching for "Yellow Line", the quilt I had retrieved from customs a little while ago and which I had left all packed because it was going to be shipped to appear at OEQC as part of the German contribution. But the box wasn't there anymore where I am dead certain I left it, now that I had received the address to which it should have been posted. Several hours of nervous running around the house, checking out various places. Parallel to this my son started crying because he had left one text book at school which he needed for his homework, and I should have been getting ready to go and teach. I managed to organize a copy of my son's exercise for his homework, and I finally did find that quilt in a place where I can't remember putting it. But nobody else in the family remembers either. (It has since been shipped.)
There is a saying in German "The house doesn't lose anything." I just wish sometimes it would tell me where it was hiding things...
Posted by Uta Lenk at Tuesday, October 08, 2013