I always thought working on a commission would be wonderful. Who wouldn’t want that situation: working with the knowledge that you will be selling what you are working on.
But commissions aren’t easy to get, so for a long time I had to be satisfied if I sold a finished quilt. (And it is interesting that the ones that sold all went to places which felt right at the very first instant. The good ones do find their place, eventually.)
Last year in the spring, then, while I was frantically working to prepare for the exhibition in Ste. Marie-aux-Mines, suddenly three commissions came in. Why then – when I was under extreme pressure anyway? I took the risk and told every one of them that I wouldn’t be able to do anything until October. Luckily, all of them said they would wait.
The first was merely the completion of my UFO Storm at Sea, and that was the first to be finished, quickly, in the fall after I returned from .

The second was a request for two pillow cases in a special size, for a special background. This one I wasn’t too happy about, I admit. I know that the person who commissioned them is an admirer of my quilts. However, she does not have a lot money, and I also know that she lives in a family environment that is not terribly appreciative of art – probably she would not have had a chance to put a quilt on a wall in their house. Nevertheless, I was a bit disappointed that she chose to ask for two pillow cases. But I soon decided to stop whining about that to myself, and merely consider it a small job to be finished, which I did. 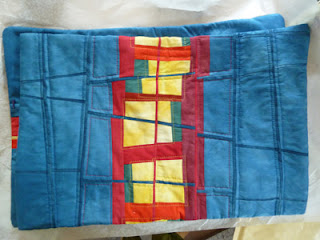 The third commission that came along, however, constituted an excursion into a different field. I had been asked to make a stole for a protestant minister as a farewell present upon leaving his congregation. His farewell service was in May, the inquiry came about six weeks before the date – and at first I shied away from the task, wasn’t sure whether I wanted to do that. But after I did a little bit of research into the prices they sold for, borrowed a stole from the local catholic minister to have a closer look at, and figured out how to change the style and design into something well doable, I finally decided that I would certainly be able to make one. Again, the time restriction did not present a difficulty, and then suddenly the donors even decided that there were more of them than would be suitable for a present of one single stole, so they increased the number and ordered four. In October negotiations began with the recipient as to which colors and what designs were to appear on the stoles.
The first three – in the colours white, green, and purple – were a bit of an emotional challenge, because I did feel rather restricted due to the given size – a width of ten centimetres (4 inches) does not leave a whole lot of possibilities. Luckily I had worked a very narrow band for my contribution to “Beyond Comfort” before – “Yellow Band” measures three inches in width. However, for that piece I had a more scrappy approach, using up as many yellow scraps as I could find, and the design part is really in the weave-and-fold-arrangement rather than in the pieced ‘top’. But by number four – red – I had begun to actually like the format and was having fun.

I could well imagine making more. It is a totally different mode of working on design and color choice, and it has taught me a lot about my own approach.

Interestingly, Judy Kirpich has recently written about working on commission, too – I saw her blog post after I had already started writing mine. Judy feels constrained by working on commission, even though she herself made the commitment to contribute a piece of art to a humanitarian cause. And I can well understand her feelings.
But with these experiences of last year, I have developed a liking to working on commission. It does broaden one’s horizon to fulfill somebody else’s wishes and ideas in terms of colors, patterns, size restrictions or even functionality of the piece commissioned. As long as the deadline is not too strict. It might take a while, a gestation period, to develop the right idea.
Posted by Uta Lenk at Wednesday, May 15, 2013