Being a student again

When I was having a severe creative slump in early March I decided on the spur of the moment to sign up for a class with Pascale Goldenberg that came across my way unexpectedly. Of course, by the time that it actually came around, it didn’t fit in well at all amongst all the things that have been going on – but because it had been paid for I went nevertheless. And I am glad I did.
I had already taken a class with her about ten years ago and knew that she is good for getting one’s creative mind moving in new directions. Ever since that class I have been a hoarder of anything larger than a square inch. (Although a few months ago I did finally throw out the cut offs of threads which I had been sorting by color in jam glasses.) So packing was easy - all my boxes of assorted scraps, with a few strips thrown in as well. 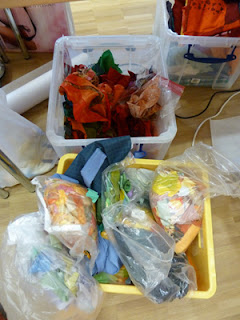 Pascale uses leftovers of all kinds, and she gets them from tailors and various other places. So her work looks decidedly different from any other patchwork, already because she uses other fabrics. Add to that her creativity...

This class that I signed up for is called “Patchwork Weaving”.
We started off with a “straight” weaving exercise - no two pieces were allowed to be alike either in fabric or in ways how they had been treated prior to using. 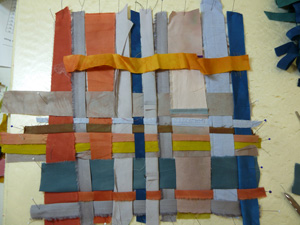 Then we were supposed to get more complicated by including round or awkwardly cut strips. 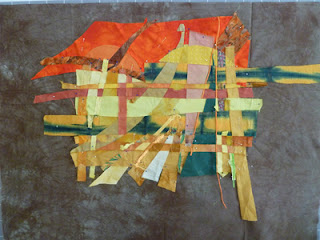 And finally we were supposed to weave something which was then meant to be cut up again to be included in another design. I wasn’t allowed to cut this one up, though, I have to repeat the exercise for homework... 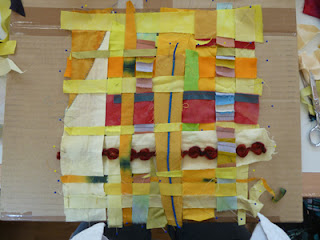 It was great to be a student again. And this class may well enter into my attempts at working smaller pieces. I am curious myself to see how.
Posted by Uta Lenk at Monday, May 20, 2013