So what have I been doing?

As the week is drawing to a close I sit and wonder whether I have really done something. Of course I have, I don’t tend to sit around doing nothing. But it was a week with little studio time, and after those I always feel as if I have been an underachiever.
During a seminar I once learned that as an artist you need to calculate that up to 50% of your working time will and should be time not actually spent on making art, but on marketing, organizing, networking, book-keeping and what-have-you-not. Many things that many people don’t really like doing.
I don’t really want to bore anybody by posting a list of those things from that spectrum of the job of being an artist, that I did do last week. But I do wonder why doing those things – e.g. getting application forms together for an organization – give me so much less satisfaction than being in the studio and actually working with fabric.
I did get that application in on time, and I also entered a quilt with SAQA’s ‘text messages’. I had, however, messed up about the measurements regarding Euro Blues, which has been rejected by Yeiser’s Fantastic Fibers. It’s too long for the text messages, so it will have to wait for other chances this year.
I don’t know what it is about this quilt. It was not successul last year when it ran as ‘Building the House that’s ’. I reworked it considerably earlier this year, and somehow my heart is in it.

But it just doesn’t seem to click with jurors. If it hasn’t made the cut by the end of the year I will throw it out.
In any case – I did finish and ironed and rolled approximately 26 pieces of snow-dyed fabrics, which went up on the website today, too. 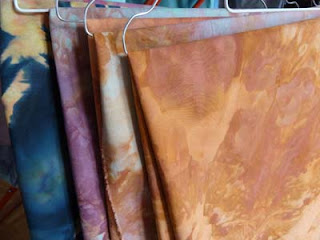 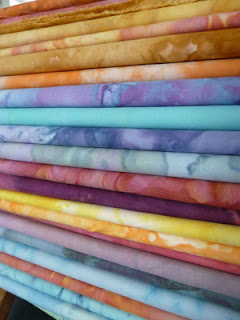 (After several days of rather unrelyable internet, which makes one rather jittery, feeling out of touch with the rest of the world...)
And we were lucky today: after last week’s official statement by the weather observation people that this had been the most grey and cloudy winter since weather observation began in –  i.e. in over sixty years! – we had a full day of sunshine. Felt like being reborn. Perhaps that holds true for studio work next week, too.
Posted by Uta Lenk at Sunday, March 03, 2013

Email ThisBlogThis!Share to TwitterShare to FacebookShare to Pinterest
Labels: dyeing with snow, rejection of entry