A return to Fagus Works

Last year I visited the UNESCO World Heritage Site Fagus Works in Alfeld, near in . The first object realized by young architect Walter Gropius and his colleague Adolf Meyer, from 1911, is a fantastic building, the site has been meticulously restored in preparation for the world heritage status, and it is still a working factory. Thus visitors get to feel the atmosphere of continued production, and although there is a museum and documentation on site, the whole place doesn’t feel like a museum at all.


I freely admit that both times I felt a bit of envy – it must be nice to be working in a place like that. They even have their own canal covers. 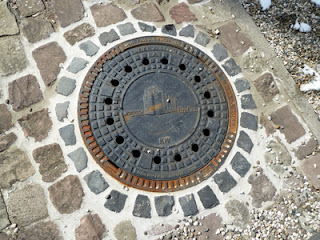 The founder of the company, Carl Benscheidt, who gave Gropius the commission, was a very social man, he initiated health insurance programs and retirement benefits for his workers, which was still quite uncommon at that time. He was an active member and president of social organizations in the community for several decades, and a local secondary school now bears his name.
In the documentation part of the site is also an interesting exhibition facility. Last year I saw a wonderful photo documentation of the restoration process which had been closely followed by the public relations manager of Fagus works. Together with Mary Schliestedt, a friend who lives in Alfeld, and Gaby Weimer, I will be exhibiting there late next year.
On the occasion of this visit we had a meeting with cultural manager of Fagus, Favienne Gohres, to fix the dates and other related aspects of the exhibition. We have been measuring and looking closely at the set-up of the exhibition room, and we have been making a lot of plans regarding the sizes and number of works we will need to have finished by then. Work begins after I get home...
Posted by Uta Lenk at Tuesday, March 26, 2013