When I returned from my two-week-stay in earlier in the year, I came through Bregenz on and thought I would stop there and visit the fantastic Kunsthaus. However, they were inbetween exhibits – I was a week too early for Ai Wei Wei’s exhibit „art / architecture“. 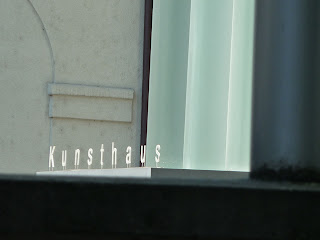 That was the moment, when I decided that I would have to plan some visits with friends and my brother-in-law before October 16 so I would be able to stop by the Kunsthaus after all. Add to that the experience of reading Ai Wei Wei’s blog, which I wrote about two days ago. Last week saw the realization of these plans – my brother-in-law and my son spent some time at the nearby mini-golf and had some ice-cream while I had some time in the museum. 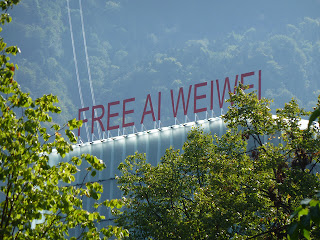 Despite the fact that Ai Wei Wei has been nominally ‚free’ for a few weeks now the Kunsthaus has kept the writing on the roof, reminding even people who are looking in that direction from further away of the fact that something is amiss. After all, he is not ‘free’ in every respect.
The exhibit covers three of the four floors of the building and concentrates on his architectural cooperations, with a few interesting pieces of pure art put in.
You get to see several different models of stages of design of the National Stadium in for the Olympic Games. Ai Wei Wei was a cultural advisor to the design consortium Herzog & de Meuron and Ove Arup & Partners, and a few buildings that Ai designed for various American clients. 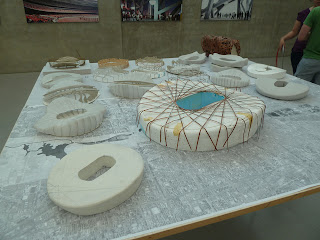 Very impressive is the installation on the third floor, namely a wooden model of „ 100“. Ai Wei Wei had been asked to develop a master plan for the development of a large area in Ordos, a city in with rapid industrial and economic growth and lots of building activities. Ai Wei Wei contacted 100 architect offices from all over the world and asked them to design one house for a specific part of the development area. One of Ai’s aims with this project was the initiation of a discussion of modern architecture in . He thinks that the current building boom in , which does not give a lot of thought to principles of design and a concept of modern architecture has a very destructive effect on Chinese cities, and the Chinese identity. These 100 designs are presented in posters along the walls of the third floor. Ai Wei Wei himself was initiated the realization of the wooden model according to scale, all houses were modeled in Chinese style woodwork, made from one kind of wood. When Ai was arrested in April the installation had not been exported from , and the organizers in Bregenz lived through a few fearful weeks while they were waiting. However, labeled as “Chinese Design” the installation did get permission for export, and on time... 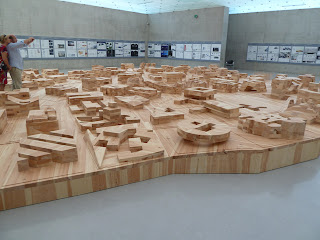 According to one of the staff at the Kunsthaus the project has not been realized yet due to financial (not political) reasons – the investor went bankrupt.

On the top floor you can see the installation „Moon Chests“. Eight large wooden boxes, each with a circular hole in different places are arranged in two rows so that you can see through them. Depending on your point of view the circular holes appear to be different phases of the lunar cycle. 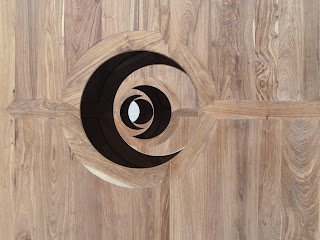 You can also see two photo-series on screens, and two videos. One of them is „Beijing: The Second Ring“. The other is a documentation of the destruction of Ai Wei Wei’s newly completed studio in Shanghai in 2011. The city of Shanghai had invited him to build a studio there, and by the time it was finished he had turned into a politically undesirable person, so the studio was destroyed.
This last video left me rather distressed. What an absurd procedure – to invite somebody to come to a city and build a studio there, and then to demolish that studio just after completion. It seems somewhat inconsitent that the videotaping of the demolition was not forbidden. During the video you could see that Ai Wei Wei himself was present during the demolition, on site. I’m impressed by the mental strength that he must have – to be the personal witness to the demolition of one’s studio, even if he hadn’t worked in it yet, must be a very emotional experience. By videotaping the procedure, he turned around and transformed that experience into another piece of art, and of resistance against the forces who had ordered the tearing down of the building. You have to be very strong to be able to do that...
Posted by Uta Lenk at Wednesday, August 31, 2011