While we were vacationing at the North Sea during our summer holidays my family gave me a day off to go and see the  Ada and Emil Nolde Foundation in Seebüll near the Danish border. It is located in the house they lived in after the 1930s, and also during the years when Emil Nolde had been banned from painting by the Nazi Regime.
I had been there for the first time thirty years ago, on a bike trip taken together with two friends of mine and my brother. Ever since then Emil Nolde has remained one of my very favorite painters. I am delighted whenever I happen to come across one of his paintings in a museum. So imagine my disappointment when I stood in front of closed doors on May 1st, where an exhibition of his water colors was being shown at the Munich Pinakothek der Moderne. I think that’s when I decided that I would definitely go up to Niebüll during our summer holidays, although we would still be approximately one and a half hours drive away.
Even driving further north was sheer pleasure. The cloud formations that you get to see due to the different angle of sunlight (compared to what I am used to from the south of Germany) are phenomenal. 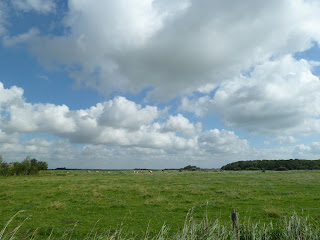 By coincidence I arrived at the museum on Emil Nolde’s 144th birthday and received an audio CD as a present with a radio play about Nolde and his travels.

Then I had a lot of time to explore the wonderful garden, situated at the foot of the hill upon which the house is located, overlooking the wide landscape. 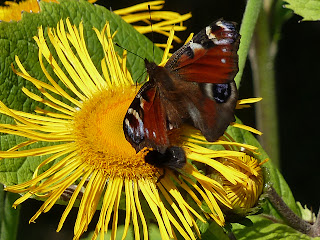