'Nadelwelt' in Friedrichshafen on Lake Constance

The past three days I have been ‘on the road’ to do a bit of demonstrating on the booth of Handiquilter at Nadelwelt Friedrichshafen. 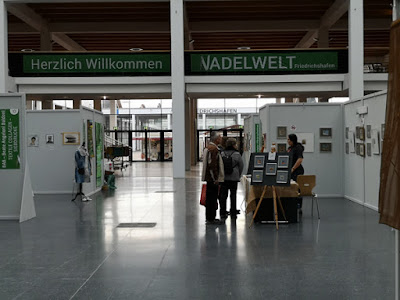 This was the first time that Nadelwelt took place in Friedrichshafen, and I probably wouldn’t have gone there if I had not been asked to do this demonstration. I was wondering what the organizers want by putting on another, second show in the year, not exactly far away from Karlsruhe. And there are other fairs sort of in the area throughout the year that are trying to fish in the same pond of ‘crafts’. Just how many fairs do they want to put up in the area?
If I still were selling my fabrics, I am not certain I would have gone with a booth, either. As a vendor, there are always so many different aspects to consider and calculate, such as travel costs, accomodation, the rent for a booth space… But it was interesting to be there. And very nice to be there as a member of a team, not a solitary vendor who has to figure out when it will be possible to slip out to use the ladies’ room…
I did not take a lot of pictures, in fact, hardly any at all.


But in the end I was glad to have been there.
The quilt exhibitions were partly a repeat of exhibits from the Nadelwelt in Karlsruhe in spring, but since I had not been there what I got to see was new enough to me to be worth looking at.

And I really did like the exhibition of the two Spanish sisters who figure as Desedamas. I go to use my Spanish as Mercé was explaining to me how they got their inspiration from dishes served in a restaurant (Cécilia) or drinks served in the same restaurant (Mercé), and how they spent over a year working towards this exhibition.

The vendors area was spacey and not too hot at all. It seemed the organizers are trying to put a different focus on what is for sale because there were a lot more vendors aiming for the general sewing public, knitting was also a focus, practically nothing about spinning (except for volunteers from the Handspinngilde demonstrating the craft), and other handicrafts that require needles were a bit underrepresented as well.
And what was really touching is that a few people who saw me at the Handiquilter booth stopped to ask me where my fabrics were, they had thought I might be selling... It felt good to hear about the appreciation for what I had done, but nevertheless I was quite satisfied that I was not there as a vendor of fabrics!


I tried to keep strict to myself about buying, as I have been throughout most of the year. But I could not keep entirely clear. I bought new threads for the longarm to try out (that’s ok, I am not on a thread diet for that), a piece of fabric with Frida Kahlo (which is jersey and has to be underlaid before I can use it for any kind of piecing and I don’t have a plan for it yet anyway) 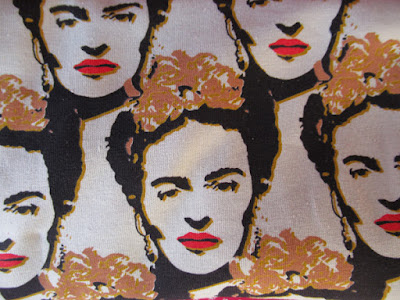 and a few – oh no! –balls of yarn for knitting. Not many, but definitely a defeat regarding my yarn diet for the year. But Sockenmaufaktur was there, and she carries a whole range of wonderful yarns, she paired up for my knit-along and offered people who ordered or bought yarn with her for this project a discount when I ran it, and so I caved in with a light heart. It’s always possible to start a new year of yarn diet tomorrow.