I must not write about what I am working on...

Two weeks ago I taught a course at Petersberg Community College where I teach at least once a year, and we have been trying to extablish a second get-together on a regular basis. This has not yet worked, but this was our second weekend this year. A smaller group, in different rooms of the venue, and because the group was split up into two sections due to sewing in two rooms, it was still a very nice weekend. Claudia finished her scrap top, for which she had been cutting up scraps for quite a while, putting them together in blocks for a while already, too, and now finally she managed to put it all together. 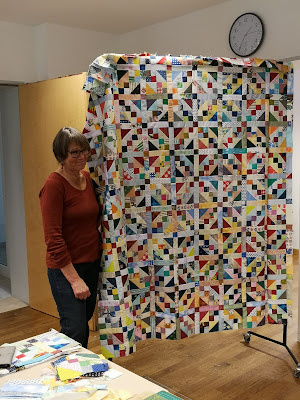 It is 'just' a scrap quilt and not meant to be anything else than that, but it was an inspiration. I have signed up to participate in the German Patchwork Guild's UFO Challenge, and when I was trying to figure out which projects I would include on my list I found many more than I could possibly handle in the nine months, so definitely there is not another UFO I need to get started. But this looks like a very nice pattern and project when you want to cut up leftovers...
During that weekend I managed to finish all the blocks for one of the UFOs listed in the challenge list, but it's one I must not write about and so I won't. After the weekend I quickly managed to put the blocks together and have by now mounted it on the longarm. So there is hope that it will be finished in time for the deadline, and after that I might be able to show a picture of it, too.

Apart from that I have been knitting (and unknitting, partly) 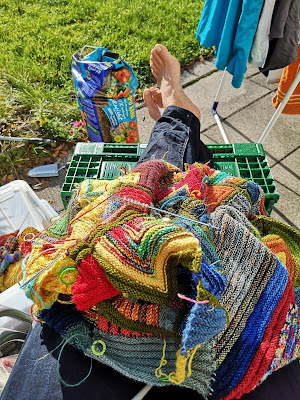 That was one of the last nice and sunny days. By now it has turned the usual dreaded November grey and I am biding my time until solstice. Luckily, these four weeks of school are much better than during the prior stretch (all external teachers), and I am not quite as freaked out about what I have to sit through during the days. In fact, it is quite a lot of subject matter I need to study, so there isn't really that much time for stitching. But I am looking forward to a weekend at the Nadelwelt in Friedrichshafen next weekend, where I will be joining the Handiquilter people on their stand.