When I’m old I am going to wear purple...

I remember that saying from way back then during the heyday of the feminist movement, which really puzzled me, because at that point - I must have been in my mid-twenties - I wasn't quite sure when 'old' would start.  I'm still not sure about that today, but that's a different story. In any case, this saying certainly came to my mind today when I received two orders for packages from the May 2014 Collection for my fabric club. Which had been a combination of six shades of purple.

My usual procedure is that I dye a certain amount of metres in every color – usually 4 or 5 lengths of fabric, depending on whether it is a month including the ‘light’ subscribers or not. One of the lengths I put on a bolt to include it in my overall selection, the others get cut up into fat quarters and half metres. A certain number of these has already been sold when they are being cut, according to the number of subscriptions. The remaining packages are the additional packages of the collection, for sale either via the website, or on offer when I go to a market. Thus, depending on the always slightly changing number of subscribers, the number of surplus packages available may vary, but I usually try to have around eight packages of Fat Quarters to begin with. These may be gone quickly, or they may linger a bit – for example, I still have a few packages from November 2013. 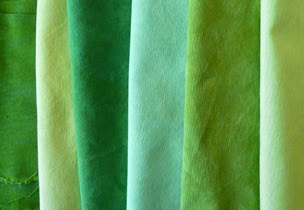 Although that does not necessarily mean this was a particularly unpopular combination, in fact, in that case I had an unusually large number of surplus packages, if I remember correctly, there were 12 or so. In any case, after a certain time, the surplus packages are all gone.
Because I went to market in with my fabrics for the first time this year, which was scheduled around the twentieth of the month, I had finished dyeing the May collection before I left and took the surplus packages with me to sell at the stand.

The regular packages had been packed, too, and were shipped to the subscribing customers after I returned, toward the end of the month. Which is my usual approximate date of shipment.
When I returned from , all the surplus packages had already been sold – that was the first time my selection was sold out before it had been shipped!


I have to admit that I was surprised by this success, as I myself am not that much a fan of purple. In fact, I had only decided on this combination after Frauke had made a remark that she thought there wasn’t enough purple in my overall selection, which came at a time when I was just beginning to make plans for May. Because I knew I wasn’t going to have enough fabric left over to do purples after finishing a full collection, I put off my original plans for May until July and did purples. Several times have I been asked whether there were still packages of May available, although the website has been marked ‘sold out’. And now today’s double enquiry... which leaves me wondering - perhaps I should do a collection in-between? Not another purple for the subscribers, because, after all, they may feel similarly about purple like I do, and I wouldn’t want to tax their patience by inflicting another six shades of purple on them so soon after May. But perhaps as a special edition on the occasion of my first appearance with my fabrics at the OEQC festival in October in Veldhoven? I think I will decide that after the next market in Erding, in two weeks.
Posted by Uta Lenk at Saturday, August 30, 2014