The Last Runaway by Tracy Chevalier

Right before I left for there had been a little discussion on the yahoo-group of the Contemporary Quiltgroup about the latest novel by Tracy Chevalier, “The Last Runaway”. 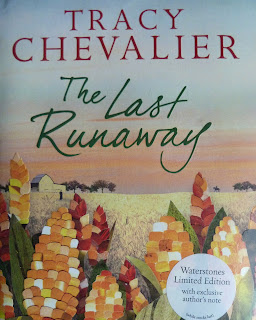 So I thought it would be the first book I would buy when I got to . As it turned out, the first book store that I went to did not have it in stock, but I did find it eventually, and read it while I was traveling.

It is set in the 1850s and tells the story of a young English Quaker woman, Honor Bright, who emigrated to the together with her sister,  engaged to be married to a man from their fellowship who had gone ahead and settled in . The sister unfortunately dies on the journey and Honor continues to their original destination on her own. The story develops around Honor’s difficulties adjusting to life, the people she meets and the friendships she strikes up with. These experiences are always interspersed with quilting, because that is one of Honor’s big talents. When she encounters runaway slaves and begins to help them she is taking a stand against her new-found family, and then the going gets rough...
I really enjoyed reading the book, it teaches you a lot of things about the Underground Railroad, and, if you’re not a quilter, a few things about quilting, too. For quilters I think it is nice to have a little bit of reference to quilting put into the daily life of Honor along the way.
The book is out in hardcover only right now, as far as I could tell, and after I finished it I decided that I would not take it back home as my luggage was tightly packed anyway. So I set it traveling – I gave it to the volunteer at the register in the Quiltmuseum of York, asking her to pass it on to other quilters after she has finished reading it. Watch out for it – perhaps it will come your way!
Posted by Uta Lenk at Thursday, April 18, 2013