A few weeks ago I joined gallerribba.

I learned about this website through the SAQA-blog that I am moderating as part of my responsibilities as co-rep for SAQA Europe/Middleeast.  The founder of gallerribba, Meta Heemskerk had asked whether we would include a post about it, and in the exchange of getting it fit for the blog she then asked me whether I would like to join.
I like the idea behind the site.
The name is derived from ’s original idea that the works on display should all be mounted on a certain Swedish furniture store’s frames that are called “ribba”. This original idea did not stick, however, the size remained, and obviously the name did, too. Small art for the wall, not exceeding 30 cm in length either side.
Quite a challenge for me, who has been working rather larger during the last few years. However, as I already metioned in my post on the small quilts I have donated for SAQA’s benefit auction,  I need to start working smaller, and the size is growing on me. However, at present I don’t have a whole lot of pieces in that size. For the beginning of my presence on gallerribba we agreed that it was possible to also show a a few pieces that have been sold.
Now I am working on filling the ranks. Last week I entered the finishing straight with a small contribution for the series Shapes, which indeed had been in the making for quite a while. 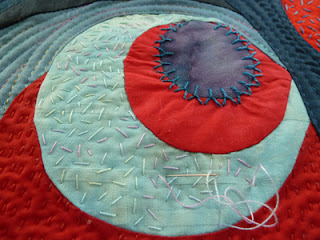 All it needs now is to be mounted on a wooden frame – which gives the piece a fourfold chance. You can hang it in either orientation you prefer, and are not bound to the particular orientation as would be determined if I had decided on a tunnel. Buy one piece, and get four different ones. Now that’s a deal!
Please take a look at the website – there are quite a few other interesting people on it!
Posted by Uta Lenk at Friday, April 26, 2013