Day before yesterday I was tested for the virus. Yesterday I received the result, negative, but the doctor said I should stay home two more days. I had only experienced minor symptoms which, in a ‘normal’ situation, probably would not have made me think twice, I would just have started my usual ‘deal with a beginning cold’ protocol and gone to work as always. However, I am working on the Covid19-suspects ward right now, and had turned to a different degree of awareness. First of all, it is a place where infections can happen, even though precautionary measures are taken all around. Secondly, it is a place where you don’t want to be the one bringing it in… And thirdly, I wanted to be sure that I wasn’t the one endangering my husband who has allergies and is in a state right now where the doctor said he must definitely NOT get it.

I had been feeling slightly more energetic since last week when restrictions began to be lifted. And this feeling still continues, although I am ‘sick at home’ right now. Drinking lots of tea, keeping my mind and hands busy. Having time to think. So many people are keeping a kind of documentation of these times. @sara.impey is making one-meter calico strips with words on them as a lockdown diary, Kathleen Loomis is posting a ‘plague diary’ on her blog, and there are many others out there. I have sort of stopped keeping a diary when the lockdown started, although I have been doing so most of my life, and pretty regularly. I just didn’t want to keep dwelling in these what I feared would be negative developments by writing them down on top of experiencing it all. For example, this photo was taken on the day when the supermarket introduced the limited numbers of custormers inside, and people had to wait in line outside. 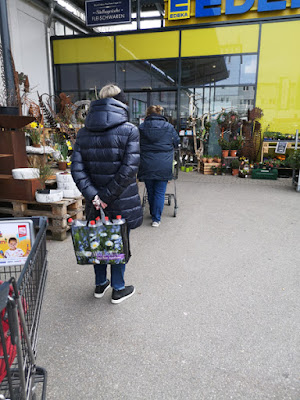 Quite an aggressive tone came from the people in line when I inattentively walked past them because I had been completely focussed on something and not noticed that they were standing there. I remember wondering where our way of interacting with each other was going, how quickly does a sort of civilized manner deteriorate?
I know that keeping a diary, writing about good and bad experiences is supposed to help you deal with it better, but I just didn’t feel up to it then. But now as I am beginning to feel better I have decided to work on a ‘diary of recovery’. Of myself, and hopefully, of the overall situation in the country here, and for the entire world. It may be a while before recovery really becomes noticeable, but searching for good, pleasant, beautiful things might be a way for me to deal with it, to find courage to wait out until it actually happens?
I suppose starting it on the day after I received the verdict ‘negative’ is as good a day to start that project as any. Who knows, it might not be my last test or result… but next week we are going back to school, so at least the danger of infection through direct contact to patients is reduced, for a few weeks at least. Perhaps the posts are not going to differ that much from the way I have been posting before, I don’t know yet.
We will see how it goes. As I was going through my photos on the phone I came across this one I took when I went on a spontaneous trip to Berlin with my son end of February/beginning of March. At that point I certainly had not realized that there would be a shutdown, or any of the pandemy scenario we have now become used to. It was 10 weeks ago, and seems almost a lifetime away.

During the lockdown I had received an email (a chain letter) from a friend of mine who I have always considered a very sensible and intelligent woman. This one was a surprise, because I never thought she would join in on something like this. I have made it a principle never to react to any chain letters – which is why I also have a hard time joining in ‘challenge and nominate’-acitivities on facebook. The mildly interesting part in this one was that you were supposed to send a favorite poem to the sender and the email address just above hers. The week before somebody had sent me the same thing about recipes. (No thank you, I have more than enough recipes piling up on my desk because I can’t resist clipping them from wherever I see some, and then I cook differently anyway.) What was so surprising, though, is that the whole situation seemed to be getting even to the most sensible people, reducing their alertness, falling into traps. I did send her a letter with a copy of one of my favorite poems today, because I liked the idea of sending a poem. But I don’t want to receive them from strangers.  This particular friend is also currently being a carer for her husband who suffers from vascular dementia and has developed complications that are keeping her at home now completely. Not that she could have gone anywhere lately, but still. I had sent her my recently finished improvisational wedding ring quilt which I had started in the workshop with Diana Vandeyar as comfort. 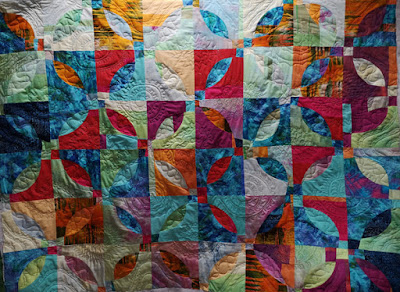 Today I posted another quilt as a gift. Recently returned from the WQC tour, I had sort of forgotten that it existed: a quilt I had called ‘Stairway to heaven’ for lack of a better idea. It had been intended as a quilty quilt from the beginning, never really meant to go on the wall. But because it had taken me so long to finish, and I wanted to participate in WQC last year, I just whipped a sleeve up, came up with a name.

Now that it was back I thought I would make it my own – as usual, I do want to have a really nice cuddly quilt for myself, but I seem to be giving them away,  always telling myself I can make myself another beautiful one, it doesn’t have to be this one. 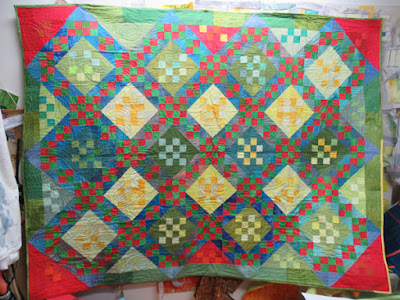 So "Stairway to heaven" took a trip to Sweden today, to my friend’s mother who has given me the most successful recipe in my life: the original Swedish Cinnamon Roll, which wins me friends whenever I make it to bring to a party, or at home. She lives in a retirement home in Sweden now, and yesterday I read in the paper that Sweden’s path of openness has taken an unexpected toll amongst the elderly, who were supposed to be ‘well-protected’ despite the different path in Swedish policies. I hope it will be with her for many years to come!
Posted by Uta Lenk at Wednesday, May 13, 2020