The four days of show in Villefranche-sur-Saône were interesting, but long hours, and overall very exhausting. Trying to talk French after having studied for my Spanish exam (and there weren’t a lot of visitors who could speak anything else but French) was a challenge, but I managed. (Of course, in yesterday’s Spanish lesson I was again using French words when the Spanish wouldn’t pop up…)
I split up the return drive spending a night in Memmingen, a city I was really only aware of from a severe court case many years ago that made it into the nation’s newspapers and that has always been a scar on my image of Bavaria. So much so that I never thought about going to look at the town - it does have a really pretty old town and is very picturesque. 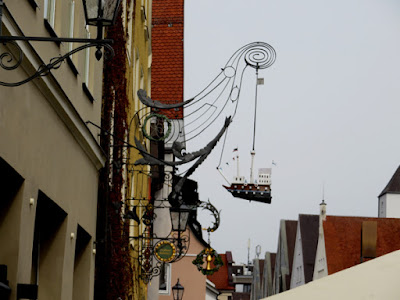 So after a really tiring week - two days of driving, four days of show, two days of driving - I immediately went back to two days of teaching. But now my class in doing two weeks of practicum and I am ‘on vacation’. Well - not really, except for the fact that on Thursday I just needed to hang out, not do much, catch my breath. But all week I have also been working on preparations for the textile art symposium. I am one by one securing handwritten versions of some of the articles from the Universal Declaration of Human Rights that I am using as the message for the quilt I want to make. Here is my student Puji writing Article No. in Thai, which really is a fantastic script. 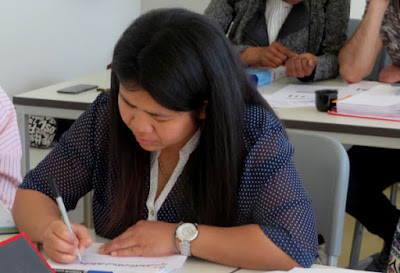 At first I let the writers chose themselves, but now that a number of articles already have been taken it is fun to consider which person or which language is the right one at this stage for a particular language. For example, I chose my Hungarian-born colleague to write the article on the right for demonstrations and expression of opinion on Hungarian. She loved that, too.
Of course, my son’s motivation for choosing Article No. 6 was completely different - he looked for brevity to get it over with quickly. But I love and appreciate the fact that he was willing to write it, after all he is not 2½ years old any more as he was when I started using his drawings as inspiration for the series ‘Play of Lines’ and could have said ‘forget it’… 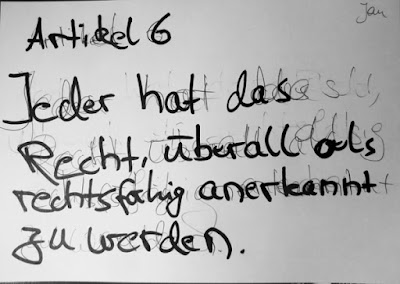 Yesterday I started stitching the intermediate layer after some procrastination, which resulted in some changes of design and orientation.

And as I am stitching some of the what I consider key phrases of the preamble, I am beginning to really fall in love with these words. 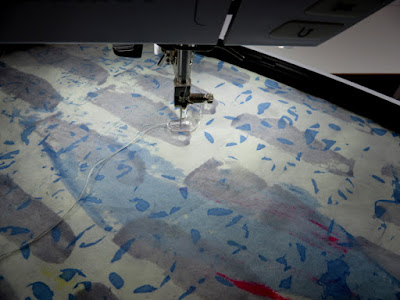 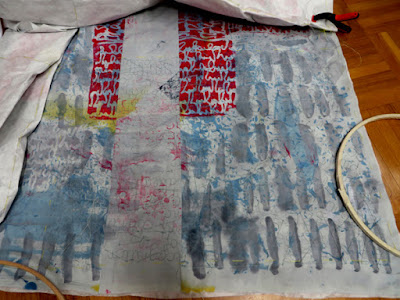 I have always held a very very high appreciation for this Declaration, but as I am repeating these phrases on the fabric, they resound within me, it is amazing:
Recognition of the inherent dignity and of the equal and inalienable rights of all the members of the human family.


What a powerful message. Perhaps it will be heard after all, some day…
Posted by Uta Lenk at Saturday, April 21, 2018