We had a very warm stretch in early April, which resulted in all the trees getting ready to bloom about three weeks early. Then frost came, a lot of the buds froze, and now we are actually having the kind of weather that is typically called ‘April weather’. In May, when it should be warmer, more springy - in any case, I must have somewhere lost track of time. Yesterday I remembered, hey- it’s May, wasn’t there usually something going on with Benefit Auction for SAQA? During the last years I would be busy at this time of year already, trying to scan the growing list of donated quilts on SAQA's website to have an overview about how many had been donated from Europe/MIddle East, so I could post them in the countdown on the blog just before the auction started.
For several years I have myself donated a piece, they all sold, and I didn’t mean to let this row break. But until yesterday I had not given a single thought to that topic. Or laid a conscious hand onto the quilt. Missed the Early Bird deadline, for sure, it had passed me by completely.

So as I was ironing yesterday, trying out little things and color combinations, my eyes fell onto three smaller quilts that were lying in the shelf opposite my ironing board. Right size they would have been. But neither of them represents me in the stage I am in right now, nor do I find them convincing. (Yes, the inner critic is a very strong presence once a quilt is finished …) But time is short - the quilt must have been received by June 1st, that means it must go into the post QUICKLY!

I have been working on something which should have been a quilt for an International Threads challenge, ‘hand stitched’. It was supposed to have been called ‘Waste No Thread’, and in it I was using up all cut-off threads of my recent pieces, longarm custom quilting, longarm my quilting, two pieces from the ‘text messages’ series that I finished recently (yes, I have been able to finish things, although there is a certain lack of ideas as to what to start on now). For the International Threads challenge it would still have taken a lot of work. For a 12" x 12", however... it was almost done! 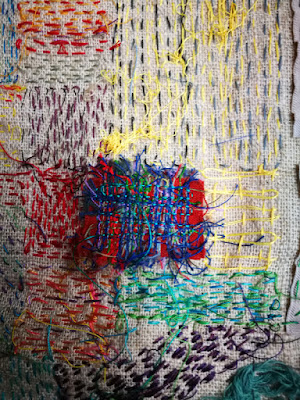 So I set about using up the remaining pieces of thread I had assembled, almost finished that yesterday. The last pieces were added this morning as I was listening to the radio, and then I also managed to do the facing and tunnel right away. 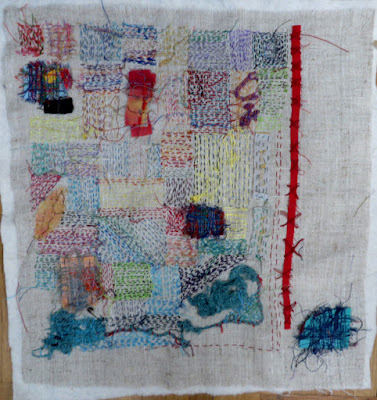 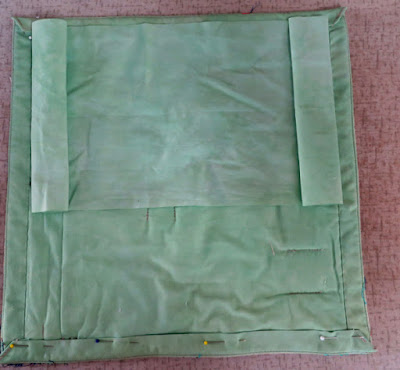 Now all it needs is a sign with the title - haven't decided on that one yet. Should it stay "Waste No Thread!", or should it be "Play of Lines XXXX: Crossing the Red Line"? I will sleep on that for a night.
Posted by Uta Lenk at Monday, May 15, 2017